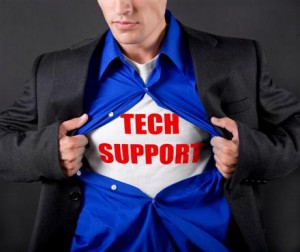 At FingerTec, we do our best to make things easy for our clients with guides, videos, tips, etc. However, despite our efforts to accommodate and expedite, there are cases where confusions are unavoidable due to customers wanting to set up the software in the shortest amount of time possible with little information in hand.

To save you time and energy, I’ll list down 10 common mistakes users do when installing TCMS V2. Print this list and give it to your new customer, I bet they will thank you later.


ONE: You have the wrong Product/Activation Key for your terminal’s Serial Number
Even after you’ve entered the product key and activation code, you cannot click the “Apply” button because it is disabled. The rule is simple, only if all information matches, the “Apply” button will be available.

Then, you need to define the same comm key /password at the key column in TCMS V2’s Setup FingerTec Terminal. If you don’t want to use the comm key/password, kindly remove the comm key/password from the terminal. Take your pick! Refer to http://www.fingertec.com/newsletter/tips_31.html  for details on comm key usage in the TCMS V2 software. 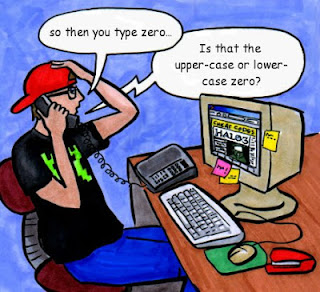 FOUR: You don’t name your terminal correctly when you use more than one terminal
When using more than one terminal via USB connection, you are getting only one file eventhough you downloaded from many terminals and the file is labeled as 1_attlog.dat, when it should be different files for different terminals. It is important that you define your terminal(s). It’s like giving names to them. By default, the terminal device number is 1, when you downloaded the clocking data from the first terminal and you will get “1_attlog.dat” file in the pen drive.  If you downloaded the clocking data from the second terminal with same device number 1, the existing “1_attlog.data” file will be overridden.

Do this:
To get the correct files for the clocking data from all terminals, you need to change the second terminal device number to a different number for example: 2.

Now, when you download the clocking data from both terminals using the same flash disk, you will get different files, “1_attlog.dat” and “2_attlog.dat”. And that’s why we all have different names.

FIVE: You configured the range time to be the same as the clocking time
In Clocking Schedule, look for Clocking tab and Range tab. Say, if schedule 1’s Clocking is set at 08:00 to 17:00, and Range is set at exactly the same 8:00 to 17:00 for all the working days. Based on this configuration, if a user verifies between 08:01 to 17:00, the time will appear in the OUT column and if the user verifies between 17:01 to 08:00, the time will appear in the IN column. Why does this happen? You have created confusion by saying that you don’t give any time for them to be late at all, that a user IN time is 8:00 and they should arrive at 8:00, no range given. If they are late for even a minute, the time will automatically be in the next column.

Do this:
You need to remove the clocking time under range tab or define the range time to be between but not more than the out time. For example: Range IN at 14:00 and Range out at 4:00, and you need to generate at the attendance. This means that, even if you arrived at 13:59, the time will be considered in IN column and even when you OUT at 4:00, the time will be generated as OUT. Please refer to http://www.fingertectips.com/2012/10/how-does-range-work.html for more details on use of range in the TCMS V2 software. 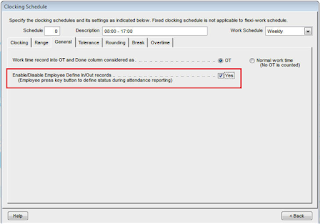 SIX: You enable Employee define IN/OUT records in Clocking Schedule
When you’ve enabled the above function, you are basically asking all users to select check IN/check OUT button before doing verification at the terminal. The transactions in the attendance sheet will appear based on the check IN/ check OUT button that the user selects. If the user didn’t select any buttons, all transactions that appear at the attendance sheet will be based on the current status of the terminal. For example, if it is a check OUT, the transaction will appear at the OUT column. This will create chaos if someone who checks IN is recorded as checking OUT.

Do this:
Disable this configuration and generate at the attendance sheet. Simple as that and let the system determine the time based on the configurations in the software.

SEVEN: There is a simple check at “replace with the latest clocking” box in Clocking Schedule for IN column that is causing you problems
When you check at the “replace with the latest clocking”, the system will do exactly that. For example, a company work hour started at 08:00am and a user came to work at 07:55am. He did his verification at the terminal and his IN time at 07:55am was recorded at the IN column. Later, the same user did another verification again at 11:00am. The problem is, the system will replace his IN time this morning to 11:00am at the IN column. And he definitely does not want this to happen.

Do this:
Uncheck the “replace with the latest clocking” box at the IN column and only check at the OT and Done column. Then generate at the attendance sheet. When you do this, the system knows that it needs to record the last time a user goes out in the OUT column and not saying that the guy leaves early for work.

Do this:
You need to configure time at “maximum hours to allow to claim OT” box. For example, 8 hours and then generate it at the attendance sheet.

NINE: You didn’t change the issued date
I give you an example. I enrolled a user on 05/02/13 and downloaded his data to the TCMS V2 software on the same day.  I then configured the default clocking schedule and generate at the attendance sheet from 01/02/13 to 31/12/13. Nevertheless, the attendance sheet is showing the starting date as 05/02/13 instead of 01/02/13. This is because, the system will show the starting date based on the user issuance date. 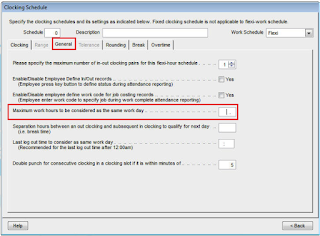 Do this:
You need to configure the “maximum work hours to be considered as the same work day” For example, 15 hours and generate it at the attendance sheet. That would mean, the first transaction of the day will appear in the IN column and 15 hours after the first transaction, any transactions will still appear in same day column even when it is the next day. So, even if a user exited at 3am the next day, his attendance sheet will record in the OUT column of the same day 05/02/13.

Confusions are avoidable with understanding. My role is to create understanding of our solutions to serve your better. Stay tuned for my next update! Happy days!

At FingerTec, we do our best to make things easy for our clients with guides, videos, tips, etc. However, despite our efforts to accommodat...