POP-UP ERRORS BUGGING YOU? LEARN TO AVOID AND FIX THEM

Bumping into errors when you are running a software is irritatingly irritating, particularly when those errors prevent you from moving forward, delaying your job and making you work extra hour(s) at the end of the day. How we wish we could have completely error-free software, but let’s face it; we are living in a world where there are many Bill Gates-type CEOs around – seems like errors do come packaged with every product.

For example, last week when I was having a good time watching a genuine decent DVD, an error message popped up asking me to refer to a website which apparently has no solution to the audio problem it created. My point is, who wants errors in their life? There’s no way to escape, even entertainment gadgets have them.

One: Closing the TCMS V2 software during the uploading or downloading process. This tip might seem like it’s coming from Captain Obvious but let me tell you, many people have no patience, and when things do not go at their expected speed, “close” seems like the best option at hand. No, it’s NOT! Refrain yourself from closing the software when it’s uploading or downloading. Instead, kill time by getting a drink or visiting the loo.

Two: Not adding TCMS V2 as a trusted application before enabling the antivirus. This is like asking your family members to stay outside your house before you lock the door from the inside. Got it?

Three: More than one user running the software (for configuration or editing) from different PCs at the same time.  While viewing by multiple users is possible, don’t let many hands operate the software at one time. If we don’t like to deal with many people at one time, TCMS V2 behaves the same way. One. At. A. Time.

Four: Mistakes in software configuration. Learn about each feature properly before configuring it to suit your company’s requirements. Improper configuration could result in errors and you definitely don’t want that to happen. Get advise from support@fingertec.com if you are uncertain. We won’t charge you. Promise!

Five: Software Bugs. Forgive us, but bugs do occur every now and then. As much as we don’t want them, sometimes we need to deal with these bugs although they complicate your life with error messages.

Now that you have already learned the causes, let’s learn how to fix them! Keep them handy in case these errors sneak into your life.

Fix One: Turn off the PC antivirus and re-install the software
i - Turn off the PC antivirus.
ii - Uninstall the TCMS V2 software.
iii - Download the latest setup file here.
iv - Install the latest setup file at the existing TCMS V2 folder.
v - Check whether you are still receiving the error message.
vi - If there are no pop-up error messages, add the TCMS V2 software as a trusted application in the antivirus before enabling the antivirus again. 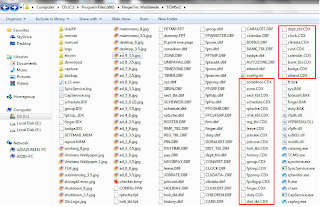 iii - Open the TCMS V2 software and check whether you are still getting the error message.

If you are still getting error messages, you can send the screen shots and backup databases/TCMS V2 folder to support@fingertec.com for our reference in finding you a solution.

No error messages will ever pop up like this Bumping into errors when you are running a software is irritatingly irritating,...