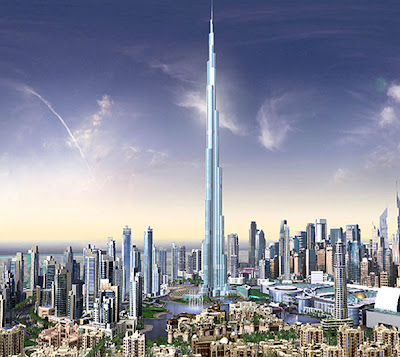 Burj Dubai, the tallest skyscraper in the world (computer image)

There is a prophecy saying the economic crisis will hit hard once a country built the tallest building in the world. It’s true to witness the opening of the then world’s highest Empire State Building in New York in the stumbling Great Depression in 1931.  The Petronas Twin Towers of Malaysia celebrated its world’s tallest in 1997, and the Asia Economic Crisis descended the following year without warning. The Taipei’s 101 Tower overtook Malaysia’s record, its construction was in the middle of the Dot-Com Bubble burst in 2000 that affected Taiwan which was economy heavily depended on IT industry.

Now, the same omen seemed to haunt Dubai. The Burj Dubai was shot up into the Emirates’ skyline; currently stood at 818 meter high and could be higher. The jubilant of achieving the world’s record might not been felt at all, because the people in Dubai have already been slapped hard by the sloppy economy. Due to the job-cuts, a report says averagely 5000 expatriates fled the country everyday. Some even left their unworthy loaned cars behind unreclaimed which have piled up the parking bays of the new airport.

I flew the Emirates to Dubai with just a quarter of seats taken, but full occupancy when I returned to Kuala Lumpur. Some says the situation could be worsened in the next 6 months. A furrowed taxi driver told me his passengers were reduced by 40%, the shopping malls garnered thinner crowds than the previous years.

In fact, when a bubble is blown overly too large, it’s just a matter of time to expect a burst. When ones’ earnings cannot justify their extravaganza lifestyle, the credit chunk will crush anytime.

But some Emiratis welcomes the slowdown. "This is a blessing; we need it," Abdul Khaleq Abdullah, a political science professor at United Arab Emirates University, said of the fiscal crisis in an interview. "The city needs to slow down and relax. It's good for the identity of our country.” Emiratis have fretted for years over the loss of their culture, as social norms became more a product of the newcomers than of the nationals. Now, some are pinning their desires for a cultural salvation on the global economic downturn, which they hope will give them a chance to reassert their customs and way of life. 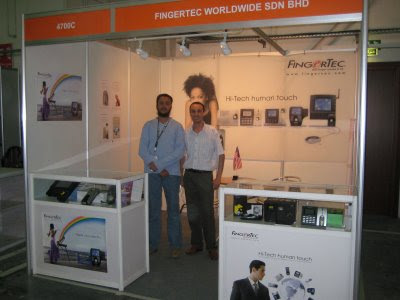 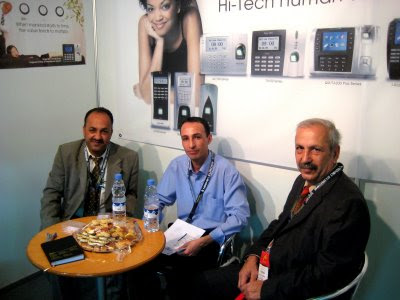 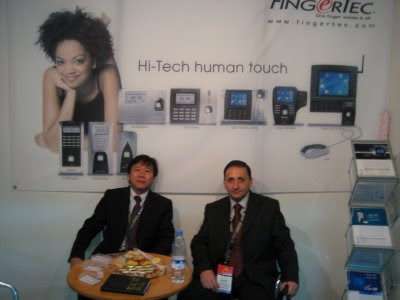 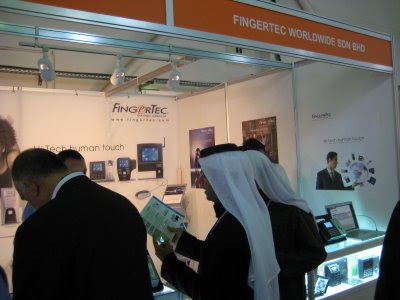 Visitors from GCC countries at our booth

Despite the slowdown, our booth at the three-day InterSec Show still drew quite an extensive sum of visitors mainly from the Middle East and North Africa. Some FingerTec partners, direct or indirect, to name a few, like Dr. Riyadh of Al Salam Co. from Iraq; Mr Maher of New Al-Mawared Co. from Syria; Mr. Khalil of Betalink Technology from Yemen; Mr. Hazim of UltraTech from Sudan; Mr. Ali Jaffal of Jaffal Group from Palestine; Mr. Abdelhak of ADC Electronique from Algeria; Eng. Abbas M. Hussein of Larsa Trading, Mr. Tahir of Nice Technology and Mr. Tabish of The Ghazi Khoory Group from UAE; dropped by to say hello; not forgetting to mention Mr. Faisal from IPTEC and Mr Pillai and Mr. Abbas from Seven Seas in Dubai helping us at our stand.  When FingerTec gains its popularity over here, the exhibition booth is also a meeting point for our partners to meet us and share their market experiences, besides drawing in some new prospects.

The economic downturn no doubt is taking some effects on Dubai, but the overall impact does not really spread to the other parts of GCC (Gulf Cooperation Council) countries (yet?), I still expect the market bullish for FingerTec products in this region this year.

Next year, for the same show, we’ll come again.

Burj Dubai, the tallest skyscraper in the world (computer image) There is a prophecy saying the economic crisis will hit hard once ...