Robberies, break-ins and burglaries are more common than you think in business premises. It could be an insider job, in some cases it is carefully planned attempts or simply someone who sees the opportunity of relaxed security in a premise and takes advantage of the situation. Surprisingly, according to FBI data in 2010, of all burglaries, 32.2% were unlawful entries without force. Looking at this fact alone, we could relate it to the slack attitudes towards security, which in turn could cost unforeseeable losses of property and lives. “This would never happen to me” can’t be applied in business organizations or even at home for that matter and it is wise to be alert and to set up security plans before anything occurs.

In this day and age, choices are aplenty for security systems. Keys have been around for centuries but as technology continues to advance, the risk of having keys is multiplying, making it susceptible to theft at any time. Recent news by Today News states that now perpetrators can take a picture of your keys and have them duplicated through this website by just sending the photos and the keys will be mailed to you at $6.  Card system is another security solution that is common due to cost and easy implementation but at the same time it poses the threat of stolen cards and compromised identity.

Biometrics has become a trend in the last 10 years because it banks in on the uniqueness of one’s identity for verification. No one has the same fingerprint; even twin studies suggest that while the each twin has the same DNA carbon copy, the ridges and valleys of their fingerprints are determined by the stress received in the womb. No twin has the same exact fingerprints. Hence, biometric technique such as fingerprint, iris, facial recognition, voice and etc have been well accepted for security products.

For a fingerprint to work as a security solution, the image of a fingerprint is transformed using an algorithm to be stored as a string of numbers as identification. Matching live fingerprint needs to be produced for identity verification before the system could proceed to other instructions such as opening doors and all activities are recorded for audit trails. The advancement of fingerprint technology makes it difficult for any culprit to steal an identity to access a certain premise unnoticed.

FingerTec R3, the latest multimedia door access system provides not only the benefits of fingerprint technology but it can also be combined with card technology and PIN security for added protection. Loaded with 3000 templates, R3 links the hardware to door access accessories along with the perfect complimentary software, Ingress for a complete door access solution at an affordable rate. Let FingerTec R3 provide you the security for keyless solutions. More information on R3 can be found here 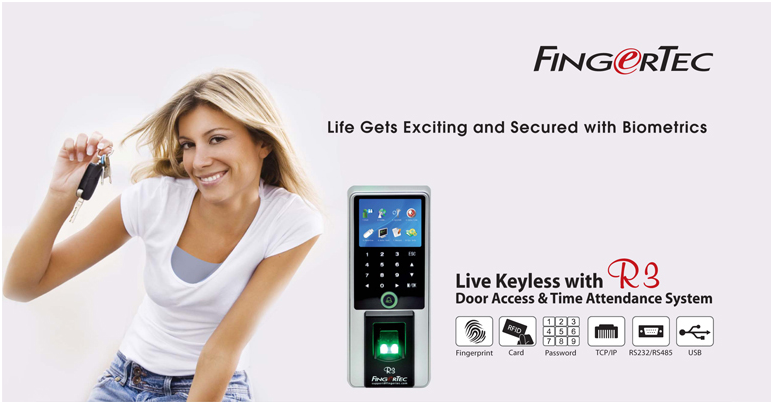 Robberies, break-ins and burglaries are more common than you think in business premises. It could be an insider job, in some cases it is c...