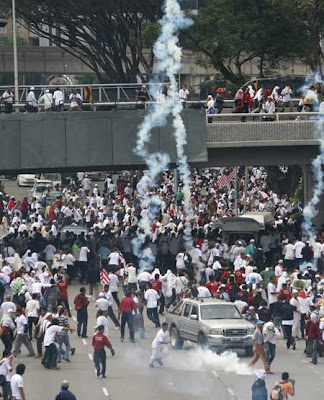 Tear gas grenade exploded a hundred meter away from me, the white smoke carried by the wind blowing toward our direction, the angry crowd started to disperse with tearful red eyes. It was painful on the face too; a Malay woman who overtook me cried out. One young Malay guy who covered half of his lower face with handkerchief distributed crude salt to every protester he met. Swallow it, it reduces pain, he said, and it worked. He must be a veteran in street protest business. I was lucky because my contact lenses prevented the gas from direct contact with my eyes. No tears and runny nose! :)

I joined the approximately 8000 crowds led by the NGO (Non-government organization) last weekend for a street rally calling the government to resume the teachings of Science and Mathematics subjects in mother tongue instead of in English.

The teachings of Science and Math in English in primary school were implemented in 2003 and were extended to secondary schools in 2007. It was a thumbs-down decision made by our former Premier, Tun Dr. Mahathir Mohamed; it clearly contradicted his own well-known pet project, Multimedia Super Corridor (MSC Malaysia), which was in line with his Vision 2020 mission to lead Malaysia towards becoming a developed country in the year of 2020.

Science & Math: Formula to Upgrade Technology Capability
Tun’s MSC Project was generally welcomed by the nation. There were two visionary objectives targeted under this mega project, first was to improve productivity by deployment of ICT (Information, Communication Technology), and second was to produce state-of-the-art ICT products to compete in the world’s market level for income generation.

To succeed in the first objective, the challenge was in finding strategies to remobilize the existing clumsy government bureaucratic machinery. To yield a positive result for second objective, it had to be tied up with a long term education planning. Particularly when this former Prime Minister’s ambition was to transform Malaysia from a mixed agriculture and lightweight heavy industry country into a knowledge-based economy country, we need a lot of young trained talents.

Indisputably Science and Mathematics are the two core subjects required to improve technology aptitude while language is used merely as a communication tool in teaching the subjects. Any language that can help to uplift the standard of these two subjects should be encouraged. Needless to say, the best medium is to use the mother tongue. The Japanese, the German, the French among a few, thrive in technology advancements without even using English as the language. If similar formula is applied, the best solution is by using Malay for national schools, Chinese for Chinese primary schools and Tamil for Tamil primary schools.

We have observed discouraging outcomes, the standard of Science and Mathematics deteriorated in these few years, and the young students’ future was victimized from this unwise education policy. As the Malay saying goes “Yang dikejar tak dapat, yang dikendong berciciran,” which translates in this context as neither English language is improving nor students excel in Science and Mathematics.

Language: Formula To Upgrade Service Capability
Majority will agree on the importance of English as the most widely used language in the world; and to go global, ones have to be proficient in the language. But shall we jeopardize these two core subjects for the sake of English language? Instead, in educationists' opinion, we should increase the time and/or add sessions for English subject. It’d most probably improve student’s command of English, and it’d not sacrifice the standard of Science and Math at any level. 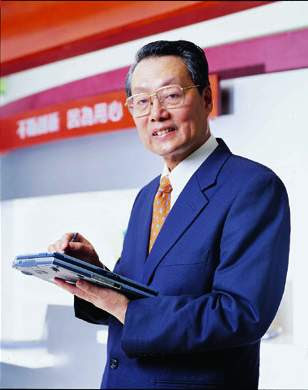 I recalled the Founder of Acer, Stan Shih (also one of the International Advisory Panels for MSC project) when giving his speech in an ICT conference held in Kuala Lumpur a couple of years ago, addressed the audience, “R&D in Malaysia should focus in service-oriented technology.” That’s the strength of Malaysia in view of our multi-cultural environment. He said we were not there yet for real hi-tech core technology development. His blunt but sincere comments enraged some politicians.

I have the same viewpoint. Some Malaysia’s politicians and businessmen like to boast that the country is blessed and ecologically rich with plentiful natural resources, rainforest, a variety of plants and animals, and etc., perfect for biotechnology development. I laughed out loud when I hear this proclamation. In fact, the keyword of biotechnology is not bio-, but the technology. In developed countries, biotechnology means genetic engineering, DNA technology or genetic modification to produce supposedly a better breed of produce and livestock; whereas in Malaysia, it means Tongkat Ali (Eurycoma longifolia), a herb that boost male’s libido.

Service-Oriented Technology: Language + Technology
I accept the shortcomings of Malaysia in providing high-tech talents. When we started our R&D for FingerTec, we transferred the fingerprint algorithm from our parent company, Peking University Founder Group of China, and concentrate the research and development on second tier technology such as product design, firmware, SDK (System Development Kit) and application software, which I think are equally important too.

Nowadays, many core technologies including fingerprint algorithm can be acquired, just like many different mobile phones that share the same operating system. But you still may choose this brand over the other due to many different considerations that drive your preferences.

And with the multi-ethnic, multi-cultural, multi-religion and multilingual environment in Malaysia (Most Malaysians are multilingual and we mean three to four languages), we understand people better. We understand the concerns and sensitivity, and the fulfillment, which can be easily translated to benefit us coping with customers better in service-oriented business world.

The software and its user interface, the efforts of localization, the user guides, the marketing materials, the service and support system, all in all, eventually transform a sophisticated technology into a do-it-yourself and off-the-shelf kind of products. Our commitment in providing customers with everything possible translate to become a motto, “With FingerTec, everything is easy!”

No doubt, this is our unique advantage.

I joined this street rally in Kuala Lumpur on 7 March 2009 Tear gas grenade exploded a hundred meter away from me, the white smoke ...