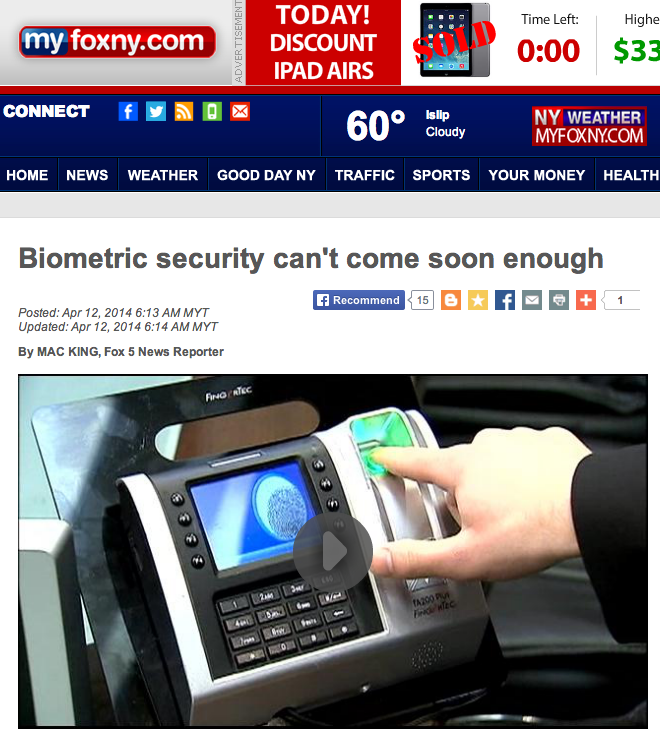 MYFOXNY.COM -
Cyber-attacks and identity theft seem a realer threat than ever before, but the tools we need to protect ourselves we have carried since birth.
Friday, we made Ryan King the most verified man in Brooklyn.
"Verified," a fingerprint-recognition device chirped back at Ryan after he placed his finger on the reader.
"Verified," a facial-recognition device said to Ryan after scanning his face.
Ryan works at the American headquarters for FingerTec, a Malaysian company replacing PINs, usernames, and typed passwords with fingers and faces we don't need to memorize.
"You can't copy someone's fingerprint unless you chop it off," Ryan said, "which wouldn't work because it has to be attached to a hand."
"One nine, zero, seven, five," Alexy Khitrov said to his phone.
Alexy recited that random list of numbers aloud, while his phone scanned his face, and -- without pressing a single button -- he logged into his online banking account.
"There are over 70 parts of the human body that create the human voice," Alexy said.
And -- for all those impersonators out there -- we can control only 15 of those parts.
Alexy founded SpeechPro, which sells voice-recognition software. He estimates 50 million to 60 million people worldwide already use a voice log-in. And that figure doubles annually.
"Passwords are dead," Alexy said. "They are so 20th Century and we're in the 21st Century."
In a world where nearly every ATM now uses an operating system without any technical support, where a bug can force every user of the Internet to change the password to every account they've ever owned overnight, where cyber-attacks and identity theft grow more menacing every day, the ability to use your voice, your finger, your face or some combination of the three to log into your e-mail, your social media feed or your checking account allows you to ensure it's very difficult for someone else to pretend they're you.
"The system is essential broken," Bionyn CEO Karl Martin said. "The idea that technology uses this secret string of letters and numbers to know who we are and we have to remember [that string of numbers and letters] is archaic."
Biometric innovators like Karl continue to develop new ways for our bodies to sign in for us. Martin's Nymi bracelet, for example, allows users to enter a password with only the beating of their heart.
Whether hardware or software, implementation all of these biometric advances requires an overhaul of infrastructure. The good news about the death of Windows XP is that it forces banks to upgrade the security systems used in their ATMs, allowing at least an opportunity to implement some new technology.

MYFOXNY.COM - Cyber-attacks and identity theft seem a realer threat than ever before, but the tools we need to protect ourselves we...