My wife and I had totally forgotten that we needed to use the aero-train at Incheon Airport to reach Gate 110. We were already late at that point in time and this would add some extra minutes, which we didn’t have. When my wife realized this fact, she quickly made a decision to send our daughter to be led away by one of my colleagues, Nisha to the Gate, while I was still in the washroom, feeling at ease, mixed with a sense of loss after the 6 days 4 nights' company trip to South Korea was finally over. 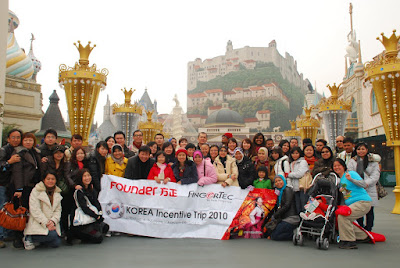 We were amongst the last few passengers who raced onboard after the final call; we saw our 9 years old daughter sitting timidly at the window seat, looking worry and sobbing in silence.

I could imagine her heart must feel like riding a roller coaster at famous Everland Theme Park, right up to the peak at one moment, because 4 hours earlier she was crowned the champion in the ice sculpture contest at the Ice Gallery most probably due to her fighting spirit and youngest in age; and plunged to the pit the next moment when she thought we might miss the flight, and she would have to travel back home alone with my colleagues; and felt relief again when we finally boarded the plane.

Overall, I still think this was a very good experience to her, because the whole journey might become a blur after many years, but the special moment would live vividly in her memory for her whole life. 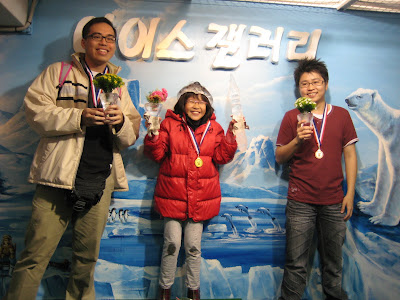 Winners of the ice sculpture contest

A month earlier, I received Patrick Ku and his wife, a Taiwanese couple for their first visit to Malaysia. When I drove them around to Twin Towers and PutraJaya, they were amazed by how advanced my country is, if compared to the Philippines and Indonesia which they had been to many years ago. But along the journey to Malacca, Patrick said a monkey that snatched his waist bag that contained of passport, cash and travel documents and disappeared into the jungle in a botanical garden in Indonesia was the most unforgettable experience for him. He was later approached by a peanut hawker to use peanuts as bait, and successfully luring the same monkey out of the woods and exchanged the packet of peanuts with his waist bag. “Whether the monkey was trained by the hawker remained a mystery to me," said Patrick, but the episode would last forever for him.

When a story is worth telling, you might like to share it with others. The same with any special experience either good or bad one ones had encountered. I still recalled two years ago, I met a new customer from the Middle East who intended to purchase two units of FingerTec readers as samples. But he was not impressed when we sent him the wrong models. We couriered the correct models quickly and told him to keep the wrong ones as compensation because of our fault.

He wrote to thank us for our swift rectification for the mistake and said he would happy to deal with a trusted company like us, and if his biometrics business venture didn’t work out, he will definitely introduce FingerTec to some other interested friends.

A better dealing experience, this is how we gained more happy customers. And a treat of company incentive trip to Korea; certainly makes happier FingerTec staff too. :)

My wife and I had totally forgotten that we needed to use the aero-train at Incheon Airport to reach Gate 110. We were already late at tha...