It all started after a staff from a furniture installer was dismissed. He filed a complaint to the authority, saying his dismissal was the result of his refusal to enroll his fingerprint for time and attendance.

The news was fast-spread by the Hong Kong media on 14 July after Privacy Commissioner Roderick Woo Bun issued a statement to the press and commented, “Fingerprints are sensitive personal data, given their uniqueness and unchangeable nature, employers should carry out a serious and cautious assessment before collecting such data.”

The news came just two weeks after the successful launching of FingerTec model R2i and Q2i in Hong Kong; I can imagine the frustration of Founder Hong Kong’s staff when the news hit the media. What a pity! 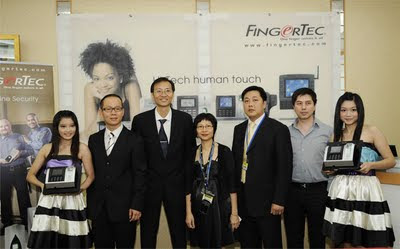 Launching of model Q2i, Elvis Law is second from the left 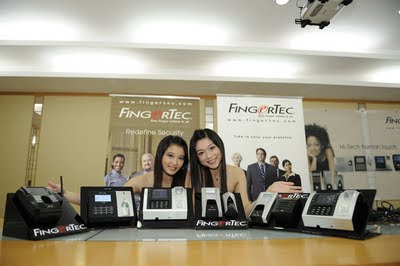 I wish I was there at the launching

The following two weeks, they’re in full combatant mode. Phones kept ringing. “One project that needs 20 units is put on hold,” a reseller informed. “Do you have less intrusive solution besides fingerprint?” another inquired. Journalists called for clarifications from Elvis Law, now a reputable fingerprint solution figure in Hong Kong, a ‘title’ that I used to tease him.

“The most shocking call was from a high-ranking officer from Criminal Investigation Section,” Elvis told me during my trip to Hong Kong last week. Indeed, what this person was asking for is some support documents about minutiae points in fingerprint technology, which prevent reforming original fingerprint for a crime purpose, and he plans to use the fact to fight the Privacy Commissioner on his exaggerated statement.

“Hmmm, ‘buddy punching’ to cheat employers is also a crime, according to the officer,” he cracked into a triumphant smile.

When something bad happened, the good sometimes follows. To curb ‘buddy-punching’, some initially was unaware that employers have started to explore the idea. Sales has increased for FingerTec Mifare card models where fingerprint is stored in individual card but not in the system, escaped the accusation of inappropriate collecting of personal data.
And, the issue has sparked some debates over the Internet and newspapers. It seemed the pros beat the cons. The most distinctive critic is that the lawmaker is always lagging behind in technology advancement.

The truth is; so far there is no reported case of any commercial-based fingerprints being reused in crimes. Do you hear any? The technology intelligently prohibits it from happening. J In commercial fingerprint algorithm, once the fingerprint template is produced, it’s no way to turn it around.

The technology has changed the world, reshaped the way we live and think and act. To me, no worry, the laggards shall follow, one day.

It all started after a staff from a furniture installer was dismissed. He filed a complaint to the authority, saying his dismissal was the...