It’s amazing how people are craving for attention these days. Even rock stars cannot escape the current waves. I personally am following Chris Daughtry and Adam Lambert (from afar that is). People all around the world want the world to know every little move that they make. “Just had a shower… putting on talcum under my arms..feels good”, “Looking at a cute chick passing by my lawn”, “Need to get my ear checked, I didn’t sound like Mariah Carey.” These are the type of ‘news’ people are spreading around and hoping to get a little tiny bit of attention from strangers from around the world.
At the same time, we bluntly tell other people, I’m interested to busybody about you, and thus, I am your follower/groupie. This is how the world is, now. Stalker might find their 'hobbies' easier. Post your whereabouts, post your picture, post your activities, post your worry, post every little tiny thought that you have online so people who are following (yes, you need followers) will know exactly how you run your daily life. Interesting… It’s unheard of in our forefather’s eras. If not, the world would be a different place. “Plan to coup d'état French tomorrow” Napoleon would Tweet. “Bye bye Anne Boleyn,” Henry VIII update would be on the day of execution.
A famous little robin bird named Twitter brings about this 'crazy' phenomenon. 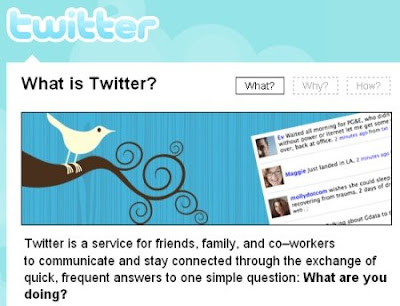 Now everybody twitters. Regular guys, celebrities, politicians, comedians, doctors, lawyers, etc. Type in max 104 characters and send the message to let people know about you. “Having lamb shank with a hot date!”, “The post office is not opened yet. Bored waiting…” Basically type anything that floats your boat and make the world a more interesting place to stay. 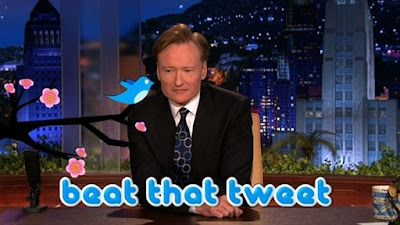 Conan O' Brien guessing a word in celebrity's tweet post in 'beat that tweet'
Twitterville, full of twitpeeps, needs some businesses too. Dell made use of Twitter to rake sales from its 600,000 followers according to a report. Conan O’Brien has a segment called TwitterTracker in the Tonight’s Show, making fun of celebrities’ blabbering. Lindsay Lohan twitted her own topless photo to gain cheap publicity and E! has used the twitpost repeatedly to garner viewers.
Why is Twitter important in business? Apart from the entertainment value it has, customers can get updated instantly and therefore, get the best deals or the freshest news straight from the source.
We welcome our customers to become our followers in Twitter. Follow us @FingerTec at

It’s amazing how people are craving for attention these days. Even rock stars cannot escape the current waves. I personally am following Chr...