Wednesday, 20 May 2009 it doesn't feel right to put any labels this time 0 Comments

I fed my father rice porridge in his sick bed. The out-of-character intimacy thrilled me.

He wanted to say something but his voice clattered at his throat.

A sudden stroke struck my father at the end of March brought me back to my hometown more often than usual.

Since I left home to pursue my degree, later started my career, and have a family of my own, I spent lesser times at my parents’ home in Melaka, despite it’s only 150km away from Kuala Lumpur.

I felt a twinge of guilt when I realized for the past 25 years I hardly looked back, and managed only very few Sundays a year to breakfast with my father at his favorite Dim Sum restaurant.

After knowing that his condition had stabilized, a month later I flew again, this time to Geneva, Switzerland to receive a Century International Quality Era Award.

The news about my father’s death hit me when I was strolling on the street of Geneva enjoying the cold Spring breeze, still wondering why none of the shopping mall is opened on Sunday.

Mr. Jose E. Prieto, the President of the Organizer is a nice guy, when heard of the news, expressed his condolence, and quickly arranged a special photo session to present the Award to me a day earlier from the official event, just before I left the hotel for Geneva Cointrin International Airport to hop on any available airplane to fly me back to Malaysia. Thanks to him. 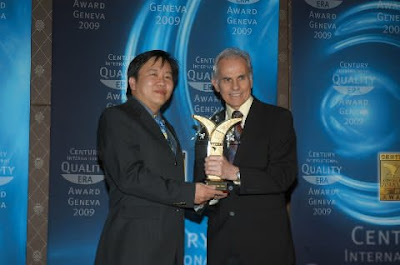 A special arranged photo session by the Organizer

I dislike the Chinese funeral rites tradition but still chose to abide. I lighted two white candles and joss sticks and burned silver papers, alongside with my siblings.

Hungry flames gobbled up the comfort-money like the money-crazed Cowhead and Horseface guards in the netherworld. Flakes of soot and ash drifted languidly in the solemn air. Hope to buy him a better afterlife.

The moment when his coffin was lowered into the crematorium, all the vivid images of the past suddenly swept over me. Him, still a radiant young man, cycled his favorite 4-year old to a movie; him, still a dedicated policeman, brought his obedient 5-year old to join his boring morning assembly; him, still a vigil night watchman, guarded the family and village through the race-riots in 1969; him, still in good appetite, chewed his favorite chicken legs in the Dim Sum restaurant; him, still sitting in his comfortable chair, smiled happily and toothlessly, when seeing his grown-up son came home with his daughter-in-law and grandchildren...

The mourners started to leave, but the blood ties stays forever and grows thicker by the day.

I fed my father rice porridge in his sick bed. The out-of-character intimacy thrilled me. He wanted to say something but his voice clat...