I recently attended the 2nd MSC Cloud Conference and had the pleasure of listening to individuals driving both local and international efforts for Cloud awareness and acceptance. For its second year running, each guest speaker took the same route and direction in their delivery of the content, which covered areas such as what is cloud, how can it improve your business, creating cloud ready apps and examples of major corporations and their experience with Cloud.
Cloud computing is not old news. It's not a newly introduced concept, yet, after many years of awareness, we are still in the ‘need convincing’ phase.
According to the Asia Cloud Computing Association’s (ACCA) 2014 cloud readiness index, Malaysia is ranked 8 out of 14 selected countries, which included Japan, Singapore, Australia and New Zealand.  We ranked 7th in 2011, and 8th in 2012. 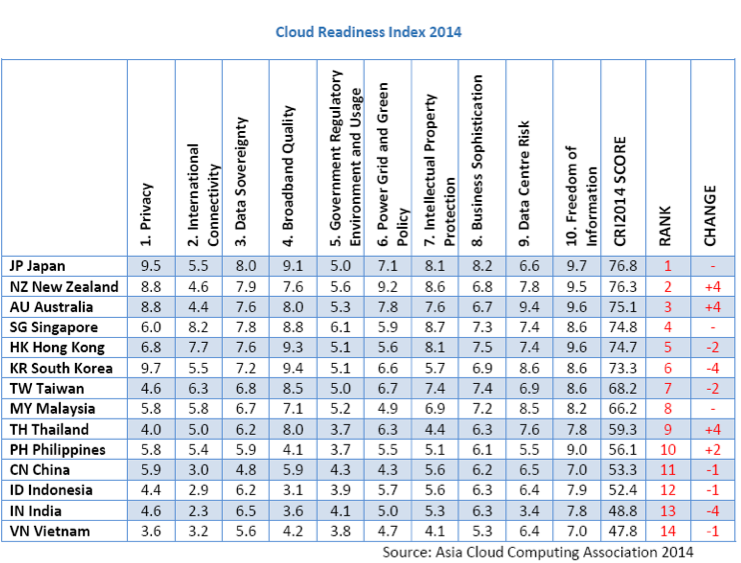 There were three points brought up by audience members in the conference, among many, that I would like to address:
·      Does Malaysia have the talent?
·      Does Malaysia have the infrastructure to support Cloud?
·      One speaker expressed ‘bewilderment’ that there are certain Cloud providers that charge 2USD per license on a monthly basis. That roughly equates to RM6.
I spent two decades in Australia (ranked 3rd in the 2014 readiness index), and having spent a year now in Malaysia, I can say that the difference between both nations is experience. Education bears knowledge and inexperience breed’s experience. The question is, are Malaysian employers willing to be patient and encourage progression within their own workforce?
I believe Malaysia has the infrastructure to support Cloud. In fact, the Malaysian banking system and Internet infrastructure is progressively faster than Australia’s, yet their processes are not. In simplest terms, the tools are available, but they’re not being made use of.
Yet, with Malaysia supposedly having a shortage of personnel in the areas of Big Data Analytics & Software Development, while working within an inadequately structured infrastructure, with limited support from local Malaysian businesses due to costing factors, there is still one company that believes that these setbacks are challenges that can be overcome.


Yet again, despite these challenges, and odds of success, we released TimeTec Cloud, our cloud based time attendance, meticulously crafted by an experienced team of professionals with an awareness of our country’s infrastructural limitations.
A common concern for companies with established middle partners (distributors) is the question of how do we involve our partners when we are able to deal directly with end-users?
Within the past 2 – 3 months, we have released and introduced two reward schemes, the Revenue Sharing Scheme for our partners, and the Loyalty Rewards Program for our subscribers.