Yellow badges inscripted with the word 'Bersih 2.0' (a mass rally planned on 9th July, also known as the Walk for Democracy) flooded Facebook, since a large number of Malaysians responded and supported the call for a clean and fair General Election, and added the yellow badges onto their profile pictures. 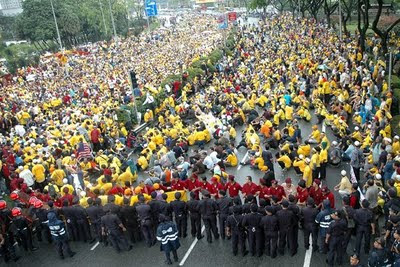 Bersih rally in 2007 to call for a clean election
The first Bersih rally was organized in 2007, and ten of thousands of Malaysian citizens joined the march to the Palace to hand over the memorandum to the King. This version two is jointly organized by over forty non-government organizations for the same objectives. Despite the government's clamped down on the pre-launch activities and arrested dissidents and detained opposition party leaders on top of imposing threats, the call for a clean election is still well received by the people.

When the Jasmine Revolution aimed to topple the corrupted governments in many countries in North Africa and the Middle East at the beginning of this year, this yellow Chrysanthemum movement in Malaysia is not a drastic political action, but rather to urge the Election Committee to ensure that no dirty tactics and to create a fair ground for the people to elect a government that truly represents their choice. 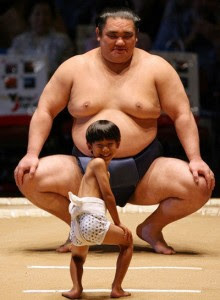 When there is an unfair competition, ethical issue would normally arise. Fraudulent, deceptive, or dishonest trade practices are the main causes that give rise to the unfair competition. Competition creates incentives for businesses to earn customer loyalty by offering quality goods at reasonable prices.

And I always thought that the business world was much cleaner than the political arena. My jaw dropped last week when Norana Johar, our COO passed me a document she got from one of our overseas distributors. It was about a Chinese biometrics supplier that launched a poison pen email attack to another Chinese biometrics supplier, with the intention to switch the rival's resellers over to them.

But I dare say that even if the strategy worked, the resellers that this company recruited would not be of any good quality. The malicious attack might damage the competitor's image at a certain extent, but it could also backfire to ruin one own's reputation. Furthermore, accusation without solid ground would expose oneself to some legal risks too.

Even if there are some truthness in the allegations, the market would soon find out. The better way of winning customers to your side is never by assaulting your competitor, but to build on your own competitive strengths.

Innovation is the key element for technology industry, where one has more options to draw out his plans and directions, and build his own blue ocean strategy market more easily than other industries. I always believe that if a technology company sought to use unethical strategies, they chose to walk on the dark side of the moon, never would they see the brightness of the sun.

Yellow badges inscripted with the word 'Bersih 2.0' (a mass rally planned on 9th July, also known as the Walk for Democracy) flood...