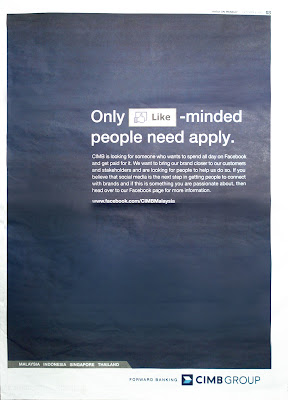 I came across this full-page recruitment ad by CIMB Bank on a daily in Malaysia, hiring someone to fill up a new position, which did not exist in the past. The position is known as a social media executive or manager or director, for some big organizations, it might even evolve into a large department.

There is another interesting article, titled “Twitter, Twitter Little Stars” in Bloomberg Businessweek (July 19-July 25, 2010 issue); it is not a special report to cover Twitter, a mini blog engine, but it is intended to discuss the rising needs for corporate to include social media in their daily operation.

The article quoted Felix Gillette, a media reporter’s observation, “Layoffs? Not in the social media departments of corporate America. As customers make or break brands online, companies are rushing to hire social media directors … ” Quite a number of the big brands in the market have hired social media experts. And all of them tap on the online social media tools like Facebook and Twitter, and some even include RSS, YouTube, or Flickr to build a closer tie with their customers, and some may use the social media engine as a direct marketing tool to promote their products. 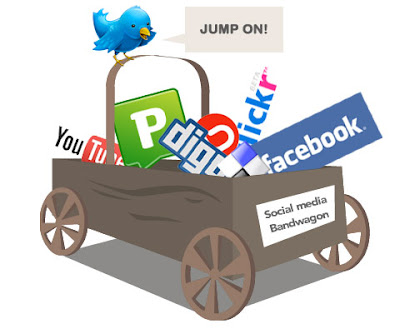 The change is fast happening. Today’s business has to build a better relationship and to have a more straightforward contact with the clients such as posting customers the latest news, or having their feedbacks read by the people at the top. Yes, it’s time for shopping malls to scrap the less efficient drop-off message boxes.

The outbound advertising media like newspapers, TV or billboards used to be popular for advertisers to broadcast their one-way message to customers, becoming old fashion nowadays in a more interactive-demanding Internet Era. In the past, not many big organizations would want to entertain customer that has zero complaint. Survey form is circulated whenever they need to gather customer’s opinions, and Customer Service Department is set up as a formality and normally only receiving and dealing with barking customers.

The arrival of Web 2.0 and Internet social media tools have changed the way we communicate. Businesses fast detected the opportunity to improve the conventional lopsided communication with customers by adopting the new wave of social media tools. Some activities (like FingerTec tagline contest) were organized within the social media sites to lure customers to “like” them in Facebook.

We are not selling consumer products, but as one of the world’s leading biometrics product suppliers, we do know the important of social media tool in helping us enhancing the way we communicate with customers.

I came across this full-page recruitment ad by CIMB Bank on a daily in Malaysia, hiring someone to fill up a new position, which did no...